It does not matter: whether we want it or not, when dealing with children, we reinforce or contest social ideas that tell us what a boy, a girl, a man or a woman is or should be. Every little act, reaction, or comment, even our body language, emits information which our children assimilate. It does not matter if we are teachers, aunties, dads, grandparents, social workers, trainers, or mothers. For children, we are models to imitate, we are their reference, the ones that give them the first physical, rational, and emotional insights of what will have such a great impact in their lives: gender.

Stories are doors to the world for children. The reading of a story is an authentic, intimal and influencing moment and space for the transmission of values. Through a story children can learn, feel and experiment.

Certainly, a story can reinforce sexist patterns or oppressing models of gender, which are as unjust as limiting. It can tell our little ones that, depending on the body they were born with, they only have one option in life: to fit in to what society expects them to be, as a girl or as a boy. And that the harder they try to adapt to that prefabricated mould, the more successful they will be in those spaces in which gender is an unmovable and controlling law.

However, a story can also be a fantastic tool, on which to lean, when our intention is to accompany our children in their path in life, in a more just, liberating and human way. We can use stories to show them diversity among people, to encourage them to be who they feel they are and to not solely aspire to gain acceptation from others but to demand with grounds a celebration of their unicity.

Joel’s Hairpin by Maria De Eguia follows this intention. It is the first volume of the Gender and Diversity Collection, which aims at offering tools to work on gender and diversity issues at different ages. The construction of gender –always understood in interrelation with diversity- takes place in each moment of our lives in many different ways. Joel’s Hairpin focuses on girls and boys between 3 and 7 years old, who may use the story in different ways. In the last page, the adult who holds the book will find a short writing with some ideas about gender and with some suggestions to take the most of the story.

Joel’s story is the following: Joel has a friend, Nazirah, who has a very beautiful hairpin. He wants one of his own, but it should have all the colours of the earth. At his birthday, he gets a present – a butterfly hairpin! And here begins his adventure, because a hairpin can be useful in so many ways! One day, Joel’s butterfly loses one of its antennae. What a shame! Fortunately, Nazirah is brave and helps him find it. Joel’s Hairpin is a story about the discovery of friendship and play that addresses issues of gender and diversity through an adventure. Challenging socially created stereotypes, this illustrated narrative is a tool for families, teachers and for anyone who wishes to help children grow up in a critical, free and human way.

In principle, Joel is a masculine character, if we were to assign him a sex. However, through diverse aesthetic resources, he frees himself from some corsets. Also, his attitudes challenge gender expectations and characteristics of a normative construction of an infant masculinity, without falling into an exchange or substitution for characteristics and attitudes of a normative infant femininity. Joel’s Hairpin, on the contrary, aims at promoting hybridity in identity, act, attitude, and feeling.

As a political project, it intends to be a tool for the promotion of gender equality through the promotion of human flourishment of each person, independently of their sex. And is there a more effective place for the politics of the tomorrow’s world, than a school and a debate or a couch, a blanket and a hug while reading a story?

Joel’s Hairpin is available in English, Spanish, Catalan and German.

If you wish to buy Joel’s Hairpin, you can do it here. 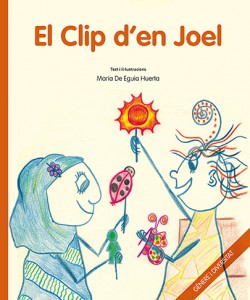 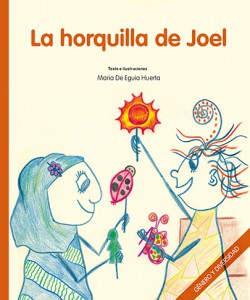 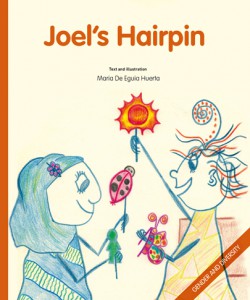